The November issue of Real Living is probably one of the best issues of the magazine of late. I found it full of houses that grabbed my interest. The first being the house featured on the cover. This beautiful home belongs to Louise & Graeme Bell & their two children Jasper & Anoushka. As most of you will know, Louise writes the highly successful blog Table Tonic & runs the equally successful online homewares store also by the name of Table Tonic. 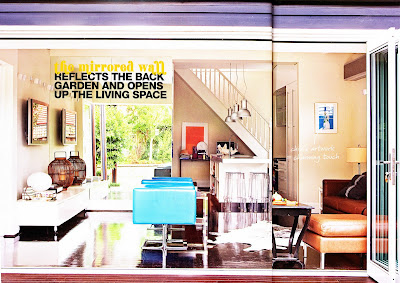 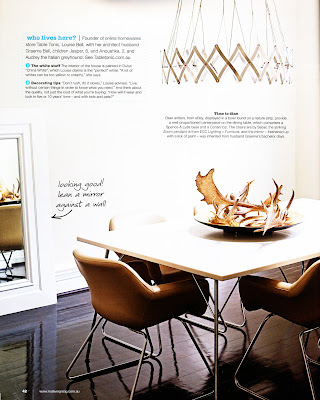 The book shelf wall in the kitchen is a wonderful way to keep those cook books at the ready. The Phillipe Starck 'Ghost' stools are functional yet inconspicuous. 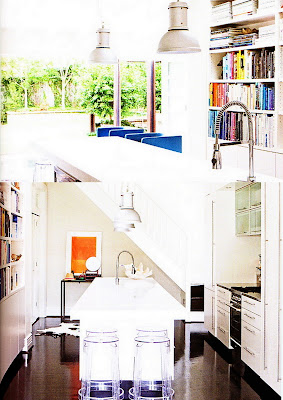 The last pic I have included of Louise's home is that of her son Jasper's room. It's light, bright & colourful. Perfect for a young man of 6 years of age. Also, being a huge Doctor Who fan, I just had to include this picture. 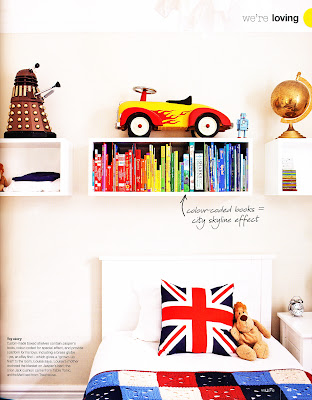 I've always loved Osborne & Little's Maharani design from the Sariskar collection, but only ever seen pictures of the darker or more neutral colourways. I quite like the colourway shown below for it's punchy brightness. 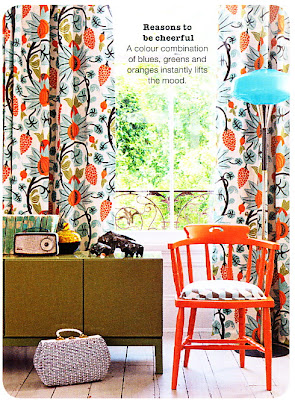 The beetle wallpaper from Porter's Paints on the wall below is fabulous. 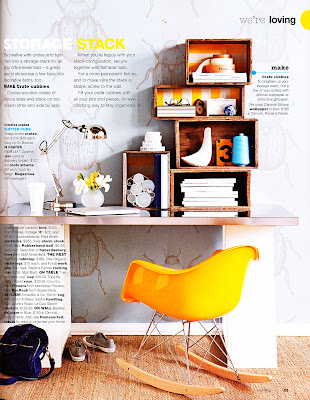 The next home I have chosen to feature, belongs to interior designer Nadia Sakey & her husband Dave & daughters Hope & Molly. It's a 1930s cottage in Auckland, New Zealand. 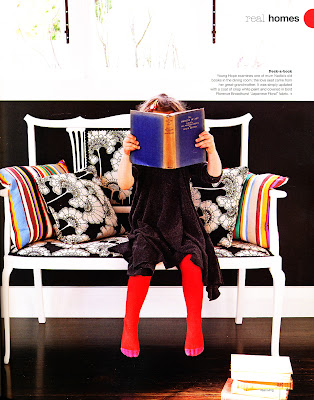 See the stripe detail at the top of the living room wall? Great way to introduce some colour to a room & to draw the eye up. 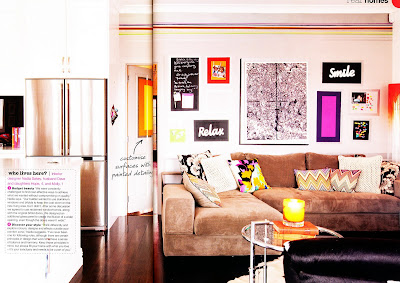 The Kartell 'Easy' pendant lights in the kitchen add a bursts of colour that ties the open plan space together. Phillipe Starck 'Ghost' stools also feature in this kitchen. 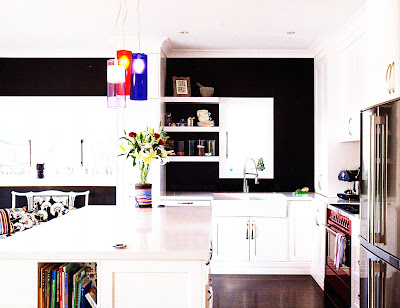 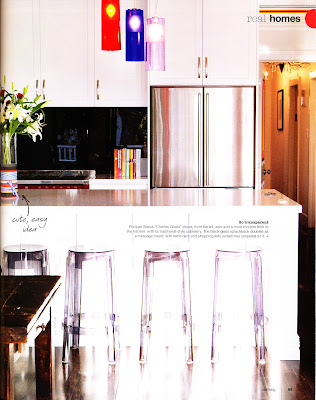 The following beachside home belongs to photographer Dewey Hicks & his wife Stephanie & their two young children. The magnificent artwork in the living room is 'Stir' by Monique Prieto. 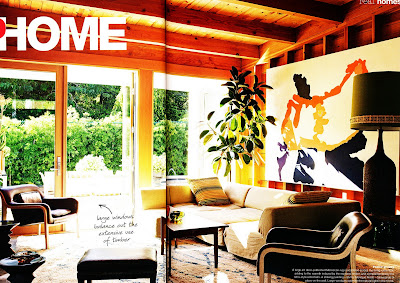 The natural materials used bring a sense of the outdoors inside. The dining room display wall & its' collectibles are envy inducing. 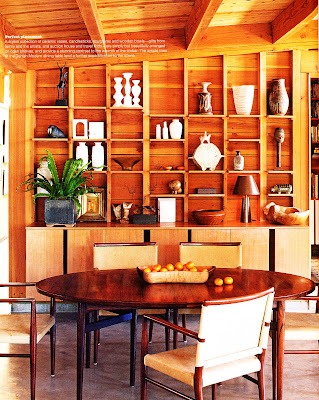 The bright hit of colour found in the kids bathroom makes bathing a happy event. 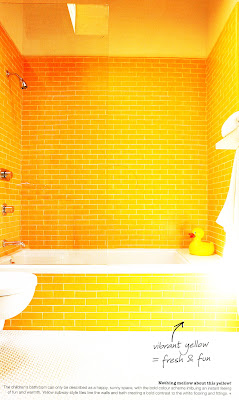 The next home belongs to actress Jane Hall of the soap Neighbours. This 1880s weatherboard cottage is located in Melbourne's northern suburbs. 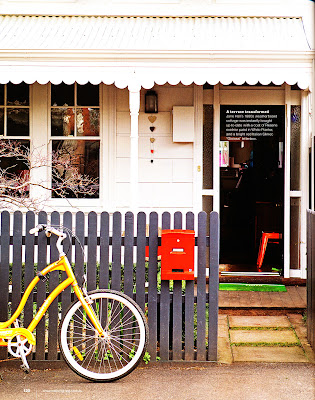 Love the rug from Loom in the living room. 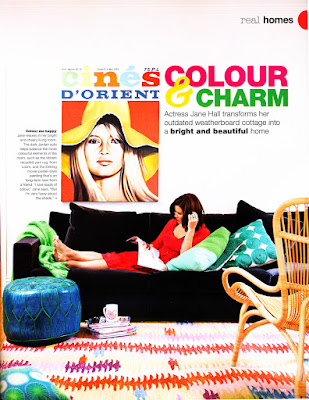 The bright yellow bar stools in the kitchen are by Mark Tuckey. They sit nicely alongside a mid-century Parker dining table & chairs that have been reupholstered in hot pink velvet. 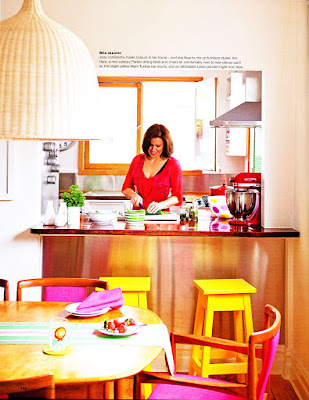 Check out the gorgeous blue lamp sitting atop the timber storage boxes from Mark Tuckey. The artwork on the wall is Jane's favourite piece & is entitled 'The Mother & Daughter With Big Bow' by Rebecca Cool. 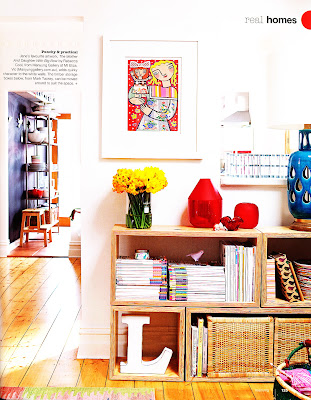 Another gorgeous lamp can be found in Jane's bedroom. I do like the wall paper also, but unfortunately no reference was made to it in the article. The final home belongs to Alison & Roger Feletto & their young family. It's a four bedroom home situated in Sydney's eastern suburbs. It is the first solo project of Stacey Kouros of Stacey Kouros Design. Stacey & the clients went with a "mod-Chinoiserie theme". The below pics are from a much larger feature. The living area features a rug from the Greg Natale Range at Designer Rugs. 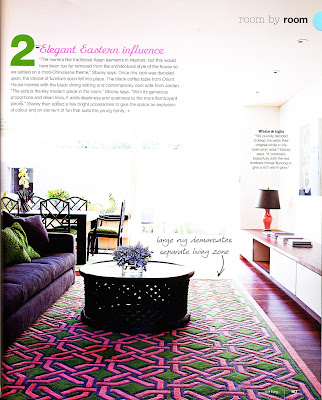 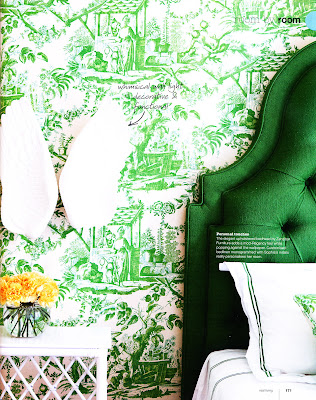 The master bedroom connects to the study. The eye catching emerald green used in both areas creates a lovely flow & harmony. 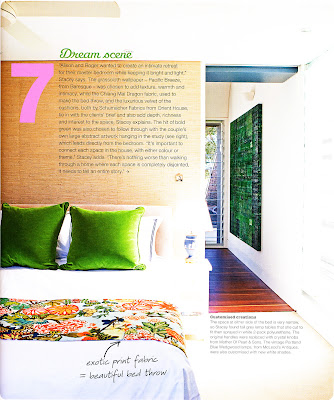