This issue of Inside Out magazine is the first with Richard Waller as Editor. It's a wonderful issue with a familiarity retained for its' loyal readership. The cover shows the family living room of artist David Band's Melbourne home. David's home & studio is featured inside. It's a home of clean lines & shapes & a pureness in its' colour scheme.
Richard Waller's Editor's letter addresses the issue that most readers fear when a new editor comes on board a successful & well loved magazine. What is going to change? Richard states "But why would I mess around with a winning formula?"

It's refreshing to see that not all new editors are gung ho about putting their own stamp on a publication to the detriment of the magazine & its' readers. I'm all for change as it is exciting & I believe can also be an expression of new ideas & creativity which is central to Inside Out's ethos. However, I  do believe that sometimes these things need to be done slowly.

Richard also states: "I believe that everyone's creative. Which is why I find it so puzzling when some people say they're not. It's like a muscle that we're all born with. We might flex it to varying degrees; it may be built up & refined or it may shrink or waste away due to lack of exertion or interest. But it's there for a reason. & not to use it is to lose it." This really resonated with me, as for a long time I believed I wasn't creative at all. I believed that this gene was passed from my mother to my sister & somehow bypassed me. It's only now that I really believe in my creativeness. & yes, as Richard stated, "Not to use it is to lose it."
Now on to the issue & it's features. It's a pretty hefty issue, being 16 pages longer than the previous issue. The regular features appear to be just that - no changes there. Australian homes feature heavily this time. Out of the seven homes features, five are located in Australia, one belongs to an Australian expat in New York state & the other home featured is that of an Italian architect living in Florence.

The below picture is one from a story featuring internationally renowned stylist Sibella Court. Although Sibella Court's home is overall not to my aesthetic, I quite liked the wall of books & shuttered window in the living area of her Paddington (Sydney) flat.

I always love pieces using natural fibres or that draw inspiration from nature. In the picture below, I particularly like the 'Biba' lights by Kenneth Cobonpue & the rattan 'Birdnest' stools from Citta Design.
The picture below shows a white Ikea 'Klippan' sofa covered with a tea towel quilt made by "Craft Queen" Penelope (Pene) & a cushion of pieced together Rubelli linens. Pene's small Melbourne apartment contains an eclectic mix of 1950s & '60s printed materials & traditional florals & antique rugs. Pene has a fabulous store located in Fitzroy, Melbourne called Cottage Industry.
The next three pictures are little gems from the feature on expat Aussie, Melanie Brandman's weekend retreat in upstate New York's Catskill Mountains.
What a gorgeous spot to sit & the view is just serene. Perfect for a weekend getaway.
The next two pictures come from a contemporary home situated in the bush in Brisbane. It belongs to architect Shawn Godwin of Base Architecture & his interior designer wife, Natalie. The bushland setting is stunning & the design of the house draws its' inspiration from its' surroundings. Sandstone boulders form the retaining walls for the garden, spotted-gum is used extensively throughout the home for flooring & joinery. Steel & stone ground the home to it's earthy roots & the charcoal cladding that envelops the home is reminiscent of burnt fallen logs often found in the bush setting.
The following three pictures showcase a fabulous Sydney, Northern Beaches home which belongs to Mitchell English (an artist) & his wife Helen ( a bridal-wear designer). Originally purchased as a dilapidated fibro shell, it has been transformed to an idyllic family home. A piece of paradise which exists only a palm-lined path away from the beach. Heaven indeed. 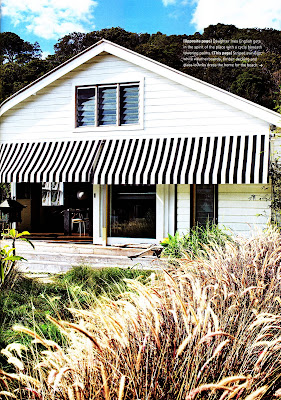 Love the black & white striped awning.
The below two pictures are the highlights from the feature on Italian architect Alessandro Capellaro's Florence home.I love the colour & vibrancy this room displays. The reuse of vintage Italian ballot boxes as bookshelves, the divan base & coffee table is wondrous.

Again the reuse of the ballot boxes as an island in the kitchen & the pendant lights designed by Alessandro from '70s glasses is genius.
An antique dining table of over three metres, the over sized pendant & the generously proportioned floor lamp fill this vast space perfectly.
& lastly, the last word Editor's Choice feature from editor Richard Waller. 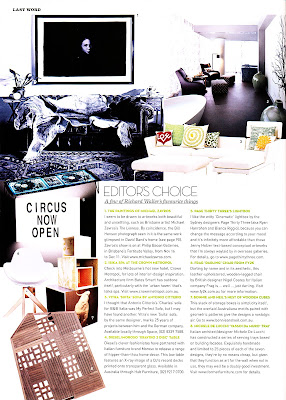 I hope you have enjoyed the sneak peek of a fabulous issue.
Inside Out Nov/Dec '10 (issue 88) hits news stands tomorrow, Wednesday 6th October 2010.
Sandy K
[all above images impatiently scanned by Sandy K]
Posted by Ampersand Design at 11:24 pm