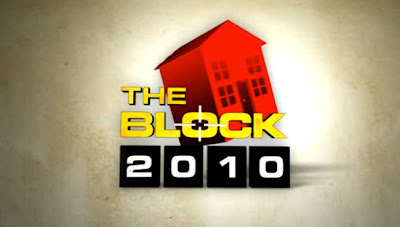 The Block is back!

After a 6 year hiatus, the highest rating series in Australian television history is back & it promises to be even more drama filled & exciting as ever.

The first series aired in 2003 & I was OS at the time so I only caught the tail end of it but was captivated. Series one winners, Adam & Fiona won $251,000. I watched the entire 2004 series & was delighted with the outcome when young couple Andrew & Jamie (who have since married & have a son & twin daughters) won $150,000. Andrew went on to complete his medical studies & besides being a doctor is also a regular on various Australian television programmes.
This new incarnation sees lovable Aussie larrikin builder & TV personality Scott Cam take over from Jamie Durie (Oprah's "discovery" from Down Under - note the sarcasm please) as the new host & mentor of The Block & its' contestants.

Once again, The Block sees four teams pitted against one another in a quest to redesign, redecorate & renovate four identical three bedroom apartments in Vaucluse, one of the most exclusive suburbs in Sydney. Although the apartment block is located in Vaucluse, it's an absolute dump - the worst block on the best street. Each apartment is over 100 square metres - very large for the renovations that need to be undertaken in the allotted time. Each team has an initial $80,000 budget ($30,000 in cash from the Commonwealth Bank of Australia, $20,000 from Freedom Furniture, $15,000 from Freedom Kitchens & $15,000 in vouchers from Reece) out of which they must pay for all items required for the renovation including, furniture, appliances, tradies, labour, advice etc.

The four teams are:

Each couple must renovate an entire room in one week & then be judged by "experts" in the design & real estate industries. The winner for that particular week receives extra cash or vouchers for their renovation budget.
Doesn't sound too hard? Yeah, right. All renovations must occur whilst the couples continue with their "regular" jobs. Therefore, all renovations have to occur before work, after work & on the weekends. Also all council restrictions apply - this means power tools can only be used between 7.00am - 5.30pm during the week & 8.00am - 1.00pm on the weekends.

The judges are:
The online (assuming forum discussions or blogging) experts are:

The winner will be decided when the apartments are auctioned off. Each couple gets to keep any profit made from the sale of the apartment & the couple with the greatest profit will also win the grand prize of $100,000. 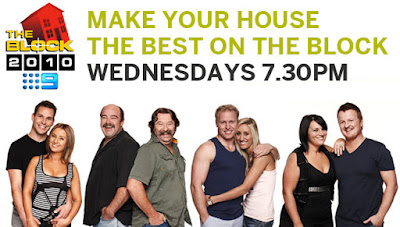 So excited!
The Block premieres tonight on Channel 9 at 7.30pm. I can't wait to see what you Aussie viewers think.
Sandy K
[all above images via ninemsn except the last image via Freedom Furniture]
Posted by Ampersand Design at 12:47 am