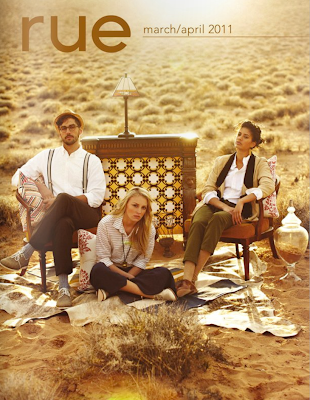 Rue Issue 4 is now live. To be honest, I've literally flicked through this issue as time is not on my side this morning - a pesky thing called work is getting in the way. The cover is appealing to me, I love the tones. Unfortunately it relates to a fashion spread rather than an interiors related story but all the same, it's a lovely cover.
Issue 4 definitely deserves further perusal. Go look for yourselves & I will definitely be spending more time (what's time?) on this issue when I return home.
Have a great day!
Sandy K
[above image via Rue]
Posted by Ampersand Design at 7:45 am

Where did that come from? 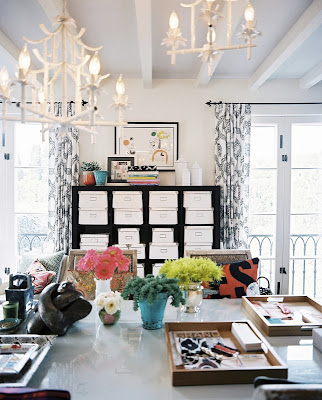 A space I wouldn't mind blogging from instead of from my bed!  Interior Design by Betsy Burnham. Image via Lonny Feb/Mar 2010 by Patrick Cline
I love blogs. My suspicion is that you all do too. Writing posts can bring the blogger great satisfaction & usually involves a deep passion for the subject matter. I assume that all bloggers have maybe not a sense of pride about their posts, but surely a sense of ownership & a desire to be recognised as the author of their work.
This leads me to a pet peeve about blogs that I am noticing more & more. How many times do you read a post that is accompanied by wonderful pictures? You see a pic whether it be of a product you want to know more about, in our cases perhaps an interior you want to know who designed it or see more from that particular shoot, but yet there is no credit on the image as to who took the photo, where it's from or a link back to where it was originally found. This can be so frustrating for all, none so more as the person who has originally created the image whether it be the photographer or stylist responsible.
Think about the hard work you put into creating your blog posts. Is it fair if someone copies your hard work & posts it on their blog without giving credit where it is due? Of course not. So why does this practice seem to be so pervasive within the blogosphere when it comes to photo crediting? Chelsea Fuss at the blog Frolic! kick started this discussion in a big way a couple of weeks ago with this post.
The ensuing result of that great post by Chelsea & it's interesting comments was this flow chart poster that I find to be a wonderful reminder of photo crediting etiquette. It's a collaborative effort by a number of fantastic bloggers. See the credit below the image for links to the other super women. 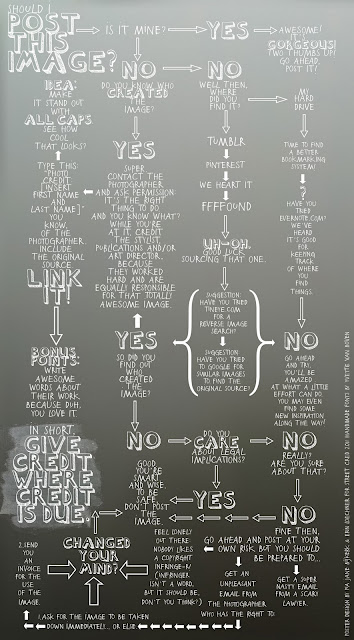 By Pia Jane Bijkerk & Erin Lochner with fonts by Yvette van Boven via Pia Jane Bijkerk's blog
Another post on the issue that may be of interest to you is this one from Design Sponge. Also, this post by Rosscott, Inc. features a less "clean" flow chart expressing a similar sentiment (may offend some due to language). It is a joint endeavour of The System & H. Caldwell Tanner of Lodwell.com.
To my mind, it comes down to a number of main points. I think the first & most common reason is pure laziness. Some bloggers just can't be bothered or they are new to blogging & perhaps a bit naive to the topic.
The second reason I imagine, is despite the loveliness & support of the blogging population, there are those who choose not to credit just to protect their resources. This is the "competitive" side of the blogging world rearing its' ugly head. To have the best pictures for everyone to ooh & ah over, one must protect where they find their pics from! It is subtle, but I have no doubt it happens.
The third is, you simply don't know where you found the pic. Now I have been guilty of this & never really considered it be a problem. I was being honest, I did not know where the pic was from. But, I was wrong. Those images have resulted from the hard work of numerous people & it certainly isn't fair to use an image if I can't give those people the recognition they deserve.
This issue has been on my mind for a while now. The number of posts where I have seen images credited to we heart it, tumblr, flickr, google & even my beloved Pinterest is amazing. I use the net & read blogs mainly to be inspired but also to glean information & store it for future reference. If something isn't credited, it just makes the task of finding the information so much more laborious.
I am trying my hardest to give credit where it is due. I've found TinEye Reverse Image Search to be quite useful in some but not all cases.

Computer Talks has a brief post on the top ten reverse image search tools here if you want to check  out some others. Reverse image search engines are definitely worth a look if you are serious about crediting unknown images or just to find the source of that beautiful image for your own information. I'm even going to the extreme of trawling back through my posts to give credit to the amazing people who play such a huge role in all of our blogs. You may from time to time see an old post reappear in your reader. I apologise if this annoys you, but I do feel it's an important thing for me to go back & credit the pics. I'm even trying to do it for my 5,000 + images on my boards at Pinterest!

Rightio. Welcome to Belle's April/May 2011 issue also known as the Hot Issue. That is exactly what it is, HOT!

The first house featured, known as 'Solis', was photographed by Mads Mogensen. It's located on the tropical idyll of Hamilton Island, off the northern East coast of Australia. The brief given to architect Renato D'Ettore, by the American owner, was for "a three-bedroom house". What a three-bedroom house 'Solis' is! Check it out.

The next home featured is a Manhattan warehouse belonging to a family of five. The home, photographed by Hallie Burton & with interior design by Ghislaine Vinas, is a whopping six storey kaleidoscope of vibrant colour. Belonging to curator & gallery owner Paige West, the home's design brief to Vinas, was composed of a thematic guide based on two pieces. These two pieces were a huge Lisa Ruyter painting which now hangs in the kitchen & a close-up photograph of a brilliantly hued budgerigar which West showed the designer.


The next home is one that has done the rounds of the blogosphere (I've cheated & not scanned these images from my copy, but taken them directly from Elle Decor's website as they are the same very photos). I've included it anyhow, both for those who haven't seen it & also because I think it's fab. It belongs to shoe designer Brian Atwood & was designed by his then boyfriend Nate Berkus. Photographed by Simon Upton, this top floor 20s apartment home is located in Italy's fashion capital Milan.

Apologies for such an image heavy post, but can you believe that is only three homes! Look out for part two of my review coming soonish.
If anyone has any questions regarding any of the items in the pictures, leave a comment & I will look up the info for you.
Thanks for sticking with me. A huge welcome to new 'fellow design aficionados' - I am humbled by your willingness to read my posts. Thanks to you all for the support.
This issue of Belle is on news stands now.
Sandy K
[above images impatiently scanned by Sandy K except for the feature on Brian Atwood's Milan home, which was lazily lifted from Elle Decor's web site]
Posted by Ampersand Design at 12:38 am

Well another mag hit the news stands today & from the look of things, this makes the third issue of Home Beautiful that has made a sneaky peek post without me actually reviewing the magazine. I promise sincerely to get my act together & post about this one before the week is out.
To be honest I haven't even cracked the cover yet as I'm busy scanning pics & organising my post for the Belle Apr/May 2011 review. It is such a big issue, that I may actually have to make it at least a two if not three part post.
This lack of organisation for my blog is a reflection of my current state. Too many things to do & not enough time! Look out for my Belle Apr/May 2011 part one post later today or very early tomorrow (AESDT)
Sandy K
[above image impatiently scanned by Sandy K who suspects she now has tendonitis from pinning too much on Pinterest & also from trying to hold the magazine face down on the scanner without it moving]
Posted by Ampersand Design at 12:27 am 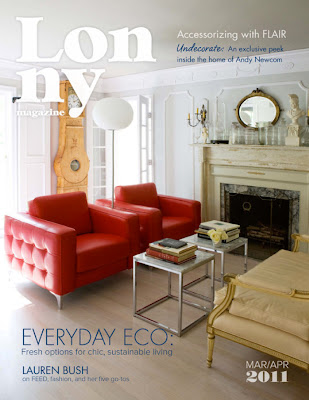 Lonny's March/April 2011 issue is now live & it is a cracker as we say here in Australia. It is full of beautiful interiors & features on FEED founder Lauren Bush, Kelly Wearstler & ceramicist Josh Herman to name but a few.
Here are a few of my favourite interior pics from the issue. 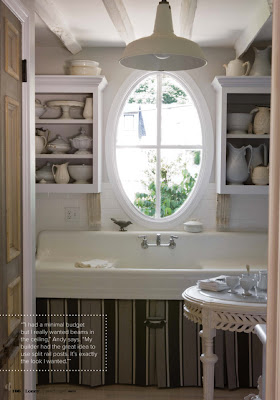 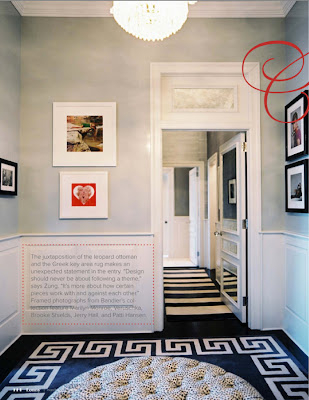 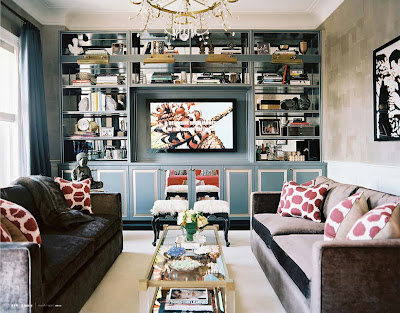 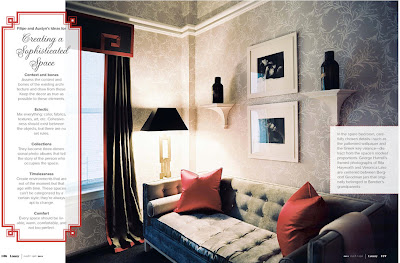 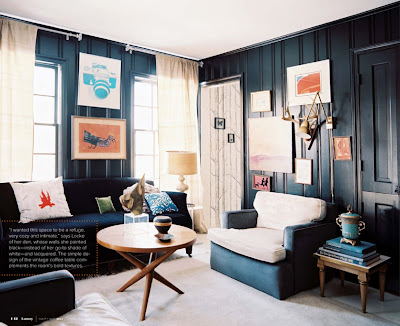 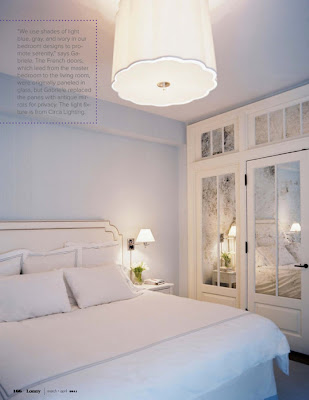 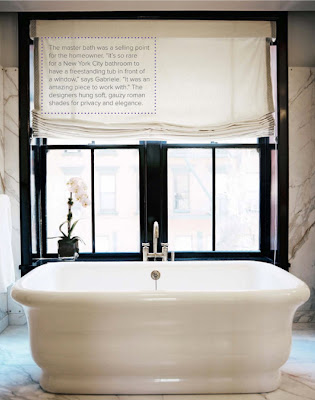 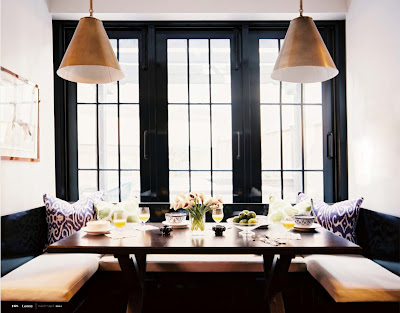 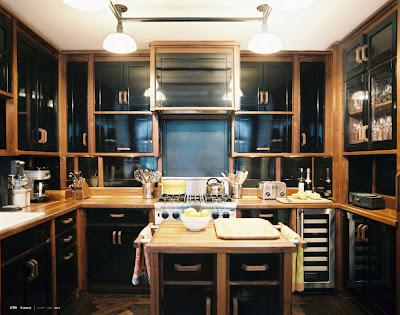 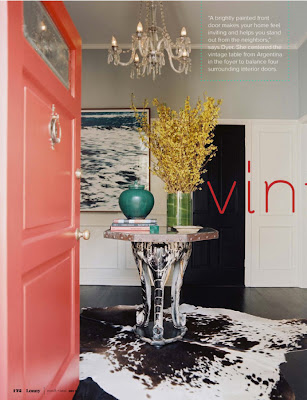 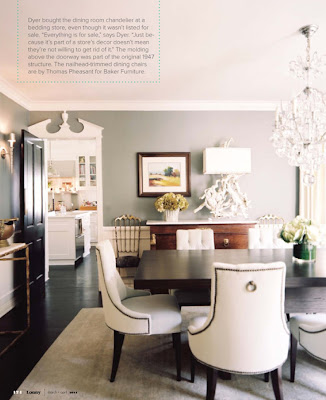 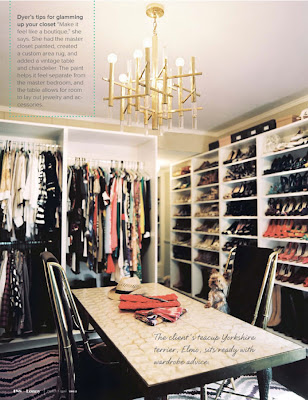 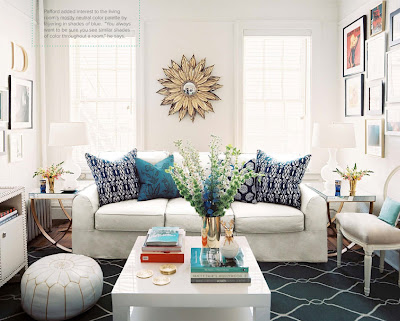 There is so much more to drool over in this issue of Lonny, so go check it out.
Sandy K
[above mages via Lonny]
Posted by Ampersand Design at 8:43 pm